I love that Launch happened. There is a large community of talented artists here and we need to find a way to make more happenings for creativity of the area. Shannon was kind enough to give me her extra ticket and I had a great time hanging out with some new (to me) ladies.
But I did not enjoy Launch as a whole. Like the previous State Fair post, I do not enjoy crowds and heat and spending money. The band I was there to see (!!!) had a pretty early billing and basically got their sound cut off in the middle of a song to get them off the stage before their hour was even up. For a band that has Sacramento roots and has gone on to some pretty great things in other parts of the world, to be disrespected this way was just unforgivable to me. Nic was basically screaming the lyrics still while the band carried on without sound till a David Bowie song was blared on the speakers and a band was ushered quickly onto the nearby stage. 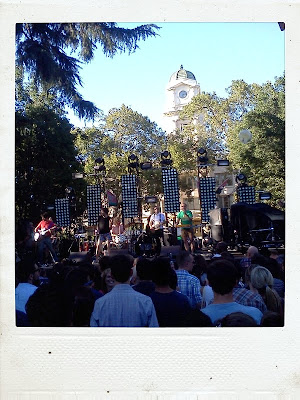 I did not really care for most of the other acts so after the chk chk chk debacle I was pretty checked out. 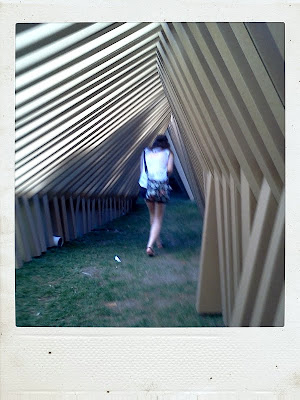 I don't want to start any controversy, but I do not care for Chromeo. I basically saw that dude as a Prince ripoff who doesn't have as good of songs and does not dance or exude sex appeal. A lot of the times he wasn't even playing his guitar! The other guy in the band obviously is the talent who needed some pretty boy up front.  Anyway, everyone seemed into it so I guess I'm just old. I think I may be at the point where if you aren't Prince or Nic Offer then I don't care.

Also, they made it clear online that "professional" cameras were not allowed so like the Girl scout I am I didn't bring it. There were so many damn cameras in the place. ugh.
Posted by yolkie at 5:35 PM