I've been sitting at work, poor as hell, salivating over Becky Grunewald's article on Sac's top 20 sandwiches in Midtown Monthly.
I want them all but should, it's just not financially feasible. But at 12 am on 2nd Saturday I decided I was going to go get sandwich number 11. A gyro from Petra. 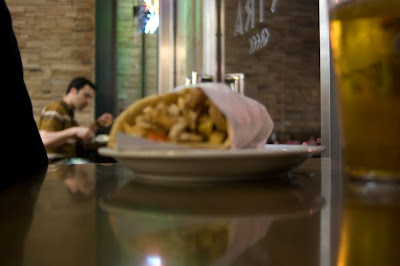 This turned out to be a disaster, kind of. It's hard to imagine that only 2 blocks from my house is a whole other universe. Full of bros and drunk girls in outfits that don't make sense in the wintertime. The only decent person out was that guy in my blurry picture. He was minding his own business, quietly eating a giant meal. We saw a fight nearly break out, a girl nearly puke while wearing a sequined dress, and very "attractive" people.

As we left a guy, already prepared for St. Patrick's Day, told Gabe he was buying cigarette from him. Gabe said he had made that cigarette and would have to make another one and it would take a second. The dude said (drunkenly), "that's... impossible. Hipsters aren't crafty."

It was strange to feel like an outsider so close to my own home. And if hipsters are anything wouldn't they be crafty? The whole thing was pretty strange and reminded me why I don't leave the house on the weekends. That was one delicious pita though.
Posted by yolkie at 8:43 PM